For those interested in moving away from the our dependence upon single use plastics, the only way to vote is:

Here's why...
In 2014 Gov. Jerry Brown signed SB 270, the nation’s first statewide ban on single-use plastic bags.  Within days of the new law's passage, numerous out-of-state plastic bag corporations backed by millions in political spending managed to freeze the implementation of SB 270 by forcing a statewide referendum on the law.  So simply put;  proposition 67 is a referendum on the law; with a “yes” vote upholding the ban on single use plastic bags and a “no” vote dumping the ban.

In an attempt to confuse California voters, the same plastics companies introduced Prop 65 to the November ballot.  Prop 65 is worded in a way that makes it sound as though its primary purpose would be to "redirect money collected" from the sale of paper bags to a state environmental fund.  This is misleading; the real purpose of Prop 65 is to confuse voters and attempt to render the bag ban void.  See the following clause taken directly from California proposition 65:

So what does this mean?  It's a little complicated, but here's the breakdown; If prop 65 receives more votes than prop 67, then 67 would be rendered "NULL and VOID" and the single use plastic bag ban will have been defeated.  Keep in mind that the implementation of prop 65 is entirely contingent upon the passage of prop 67. This means that if prop 67 does NOT pass, then prop 65 is irrelevant (because there would be no revenue collected from paper bags to redirect anywhere).  So it becomes clearer that the motivation behind prop 65 is NOT to redirect money to an environmental fund; but rather to undermine and defeat prop 67 (the plastic bag ban).

"It’s cleverly deceptive,” says Mark Murray with Californians Against Waste. “It’s really just designed to shift the conversation away from the problem with plastic to a conversation about the cost. Their goal, number one goal, is to block the passage of the statewide bag ban.”

In the end, following the money generally helps illuminate the motivation behind ballot measures.  Below is a listing of those supporting and or opposing these propositions: 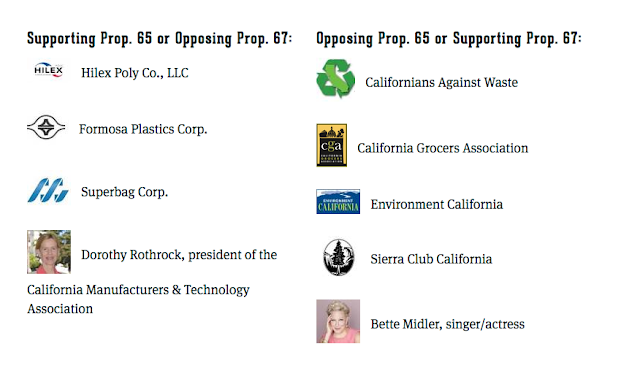 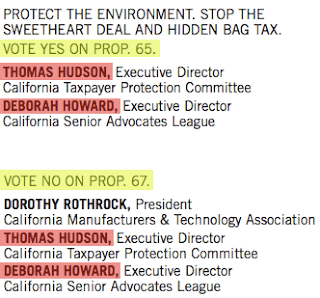 It's clear that supporters of prop 65, are opposed to prop 67 and have spent many millions of dollars to push this agenda.  To hide the actual intentions of prop 65 behind the guise of environmentalism is reprehensible.  Don't let these out-of-state plastics corporations pull the bags over your eyes.  Get the word out and keep our beautiful State, Golden.